Manic Monday! This is basically to recap how my weekend went and what I have upcoming for the week.

•Well I am officially out of the Survivor Pool already which is OK, most of the alternative picks I would have chosen lost anyways SO it just wasn’t meant to be.

•The Red Bulls game that Ant and I went to was amazing! Our seats where higher up and you could see everything! The Red Bulls won 2-0 and the best part was a fight that almost broke out. LOL

•I posted yesterday for Sunday Social and I loved all the new blogs that I discovered and found new link ups like my other Monday Daily Post that I already posted.

•Giants lost…. *le sigh only reason I am not completely upset is because Peyton Manning was the QB on the opposite team.

•Ant and I had a great weekend together, he slept over Friday night and I slept over his house Saturday night so it was nice quality time together :)♥

•We also watched the Mayweather fight at Ant’s friends house which is around the corner from his house. It was a LONG wait to see the fight and we ended up going to bed around 2 am.

•I watched my little cousin Michael play football for his first game! He’s 6 and all the kids looked cute in their gear that basically swallowed them whole.

Pictures from this weekend: 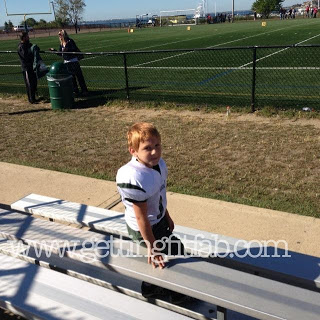 My Cousin Michael after his game 🙂 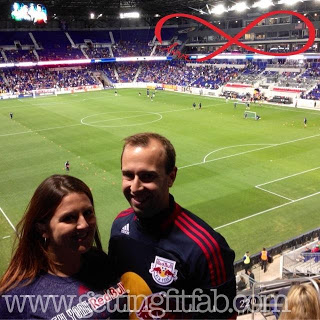 Ant and I at the Red Bulls game, in-between halves. ♥

•Work is should be a normal week, Jewish holidays are over til about November.

•I have in my calender to run both in the morning AND at night, with about 12 hours in-between each run. I have a 5K coming up October 5th so I want to be as conditioned as possible.

•I will probably see Ant one or two days this week before Thursday, he has to Ref five days this week which is good money wise. None of them are too late so that is ok.

•This weekend we have a Islanders game in the Barclay’s Center versus the Devils at 7PM in Brooklyn. And on Sunday we either have a Yankees game that they will be honoring number 42 Mo ! OR we are going to the San Genero Feast in Little Italy in the City (Manhattan).

•I have to pay only one bill this week which is ALWAYS nice.

That is about it for my week! ♥ Hope y’all have a GREAT WEEK!

Woohoo @nofodoco is back! My favorite local doughnut 🍩 shop is back in action 🎉🎉. @liveliketheflash went early this AM & grabbed a few of their flavor forecast options and a few regular faves. ⁣
Happy 6 years to my best friend. @liveliketheflash I’m so glad to have you by my side, 6 years ago at this exact moment (9 am) I was still getting ready, in a few hours we’d be doing our first look. Than at around 7 pm, we’d be having our first dance and dancing the night away.
Happy Engage-Versary to the light of my life @liveliketheflash. Your promises of I’ll never be bored & that you’ll never be a @yankees fan still hold true 8 years later. Still can’t believe almost 1.5 years after we started dating you asked me to marry you & I said yes 🤣. And this December we will be together 10 years. A DECADE, of being with me 😱. ⁣
✈️ “Fill your life with experiences, not things. Have stories to tell, not stuff to show” – Unknown 🗺⁣ {swipe 👉🏼 to see more amazing photos of this gorgeous boutique hotel}

Oh man get ready for another amazing ride in Kalis

Today is a GOOD day! It’s a gloomy day here but