Another weekend went by, it was actually a very good and productive weekend, I’m not too sad it’s over because the weather was NOT that nice out, at all.

CA and I went to a Mets game, and our seats were beyond amazing to say the least. NOW I am not sure if you know this or not but if you don’t you’ll soon know. I am a Yankees fan (GASP), I’ve always been a Yankees fan, that’s how I grew up and I won’t be changing that ever. CA is a die hard Mets fan, the tickets are also MUCH cheaper so we go to Mets game. I have a little trick to staying true to my Yankees while not making is OBVIOUS that I am a Yankees fan, it’s the American jersey for Mariano Rivera number 42 (MO!), the All Star game was held at Citi Field so the American League (Yankees) had the jersey colors of the Mets just like the National League did. So there for I blend in, only if you read “American” league on the front, and read Rivera on the back will you know I am a Yankee fan. Cool right ? 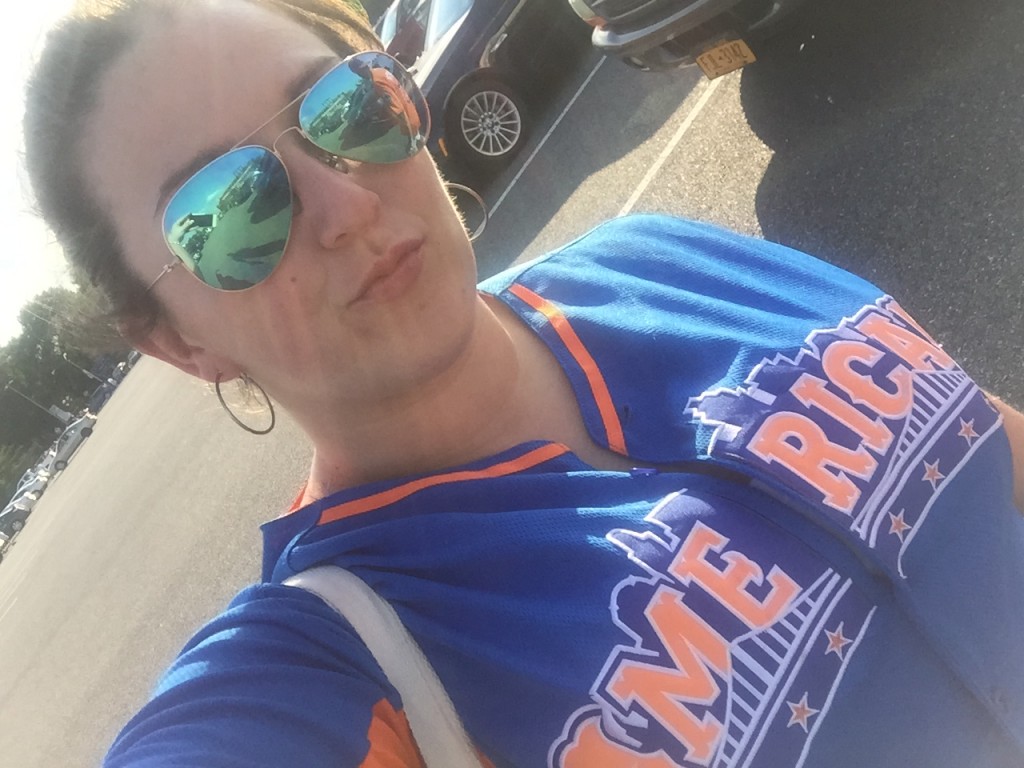 CA has originally told me that our seats were in the 400 section, little did he know that I remembered him telling me that I would LOVE the seats if he wasn’t able to sell them. We were RIGHT BEHIND HOME PLATE!!!!! I loved these seats, I had perfect view of the pitcher Thor (also known as Noah Synderguard – his real name), and all the rest of the cute baseball players butts (total girl statement obviously :P) The Mets did end up winning which means happy fiance AND they played a 2.5 hour game which makes ME happy, everyone wins! 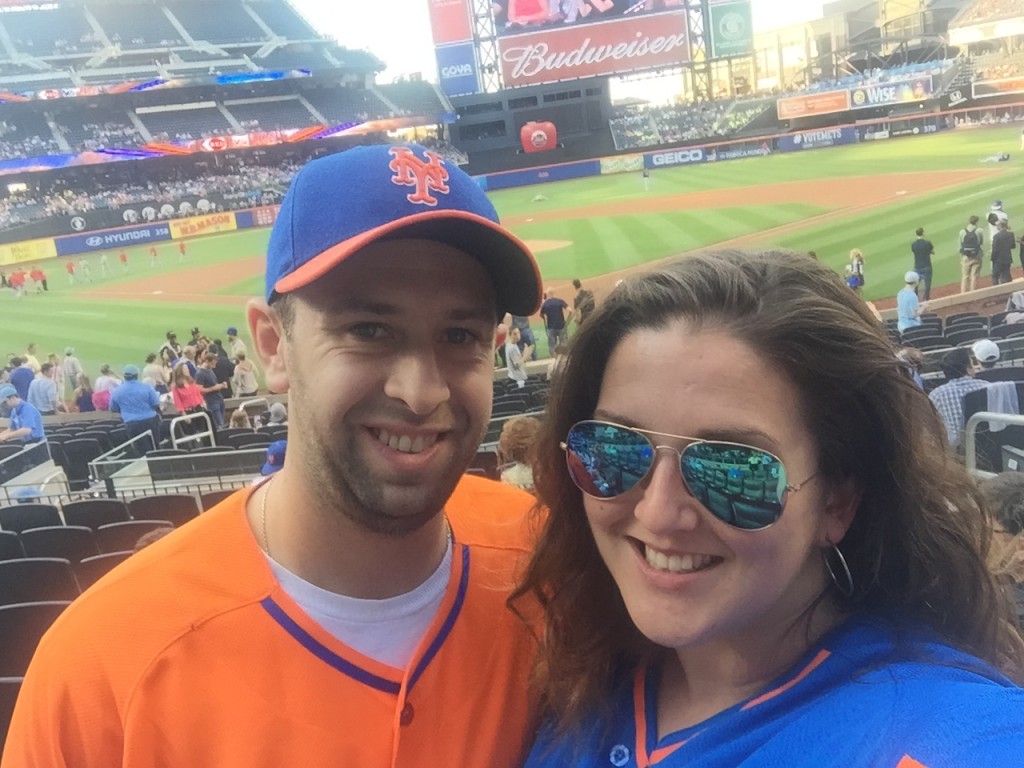 This is where the productive part of the weekend comes in. Around 8 am I make homemade sauce in the Crock pot for both dinner that night and whenever we’d need sauce. I put it on for 10 hours slow cook and tada homemade sauce with a SMIDGE of effort. 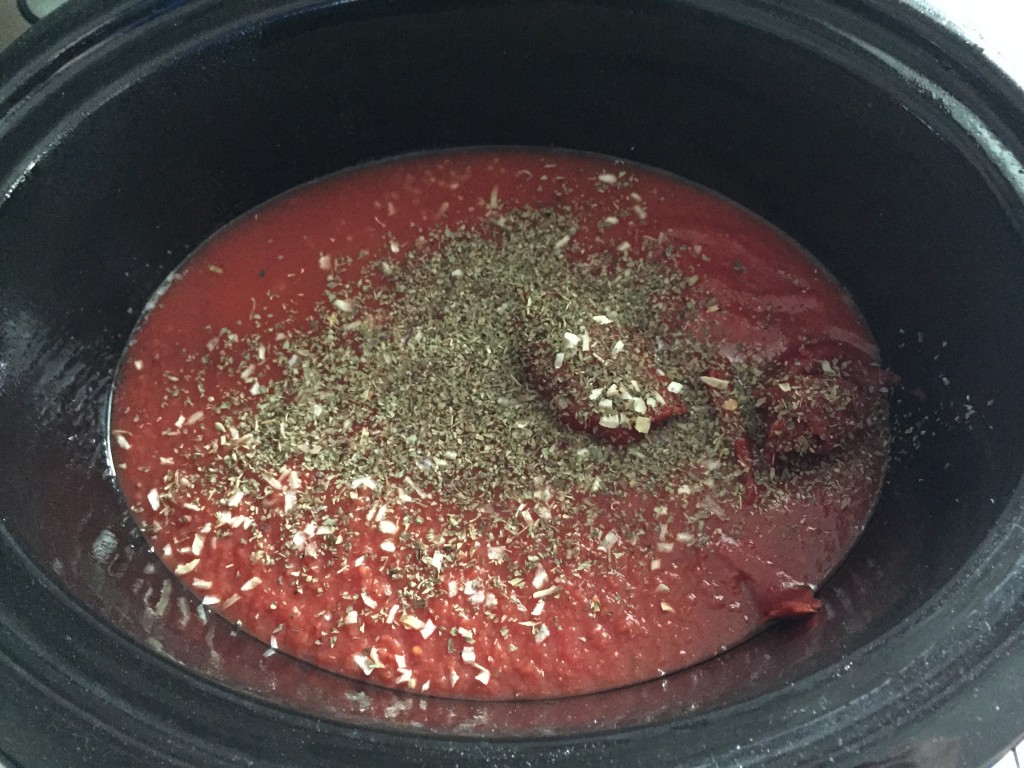 After the sauce was started in the crock pot I made CA and I breakfast, and he headed out to do his errands. I got my butt planted, put on some HIMYM for background noise and started working. I uploaded all the pictures I had on both my Canon and Nikon cameras onto the laptop you see below. I had my handy dandy list in my Day Designer and started drafting up some posts in my notebook, I also started working in Photoshop with the pictures I uploaded for the posts that I was putting together. I am very proud to say I have 5 scheduled posts for this week and the beginning of next week, and pretty pictures to go along with it! The perks of it being really gross out makes it easier to get things done inside, aka blogging needs. I also went to get a fill in for my nails, I hadn’t gone in almost SIX weeks so it was desperately needed to be done. 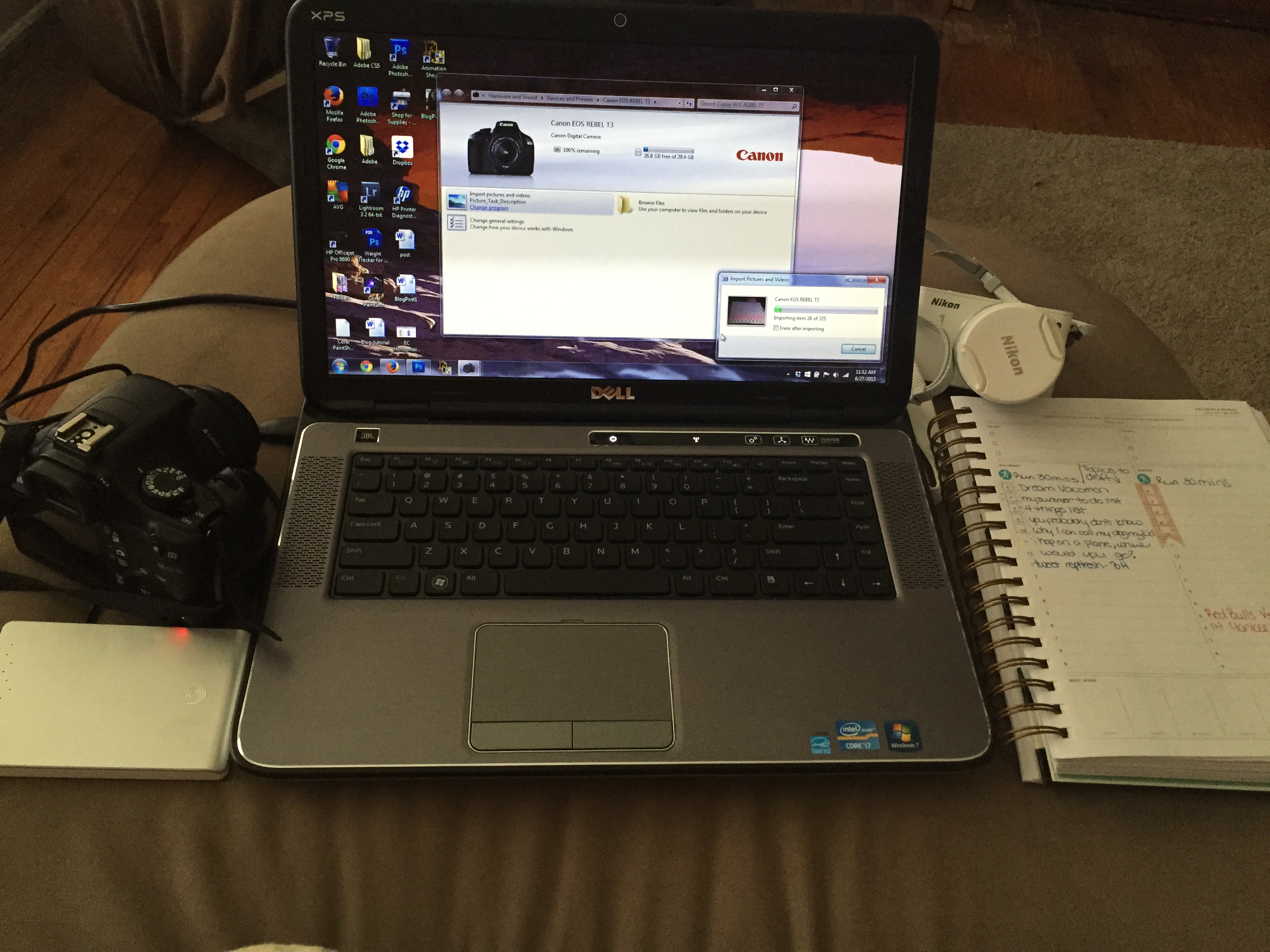 Saturday night we stayed in because CA was working after he finished running his errands, so after he finished working he came over and we had eggplant parm, pasta, and LOTS of wine (perk from his job). I also got together my Red Bulls gear for the game that happened on Sunday! I have a scarf (soccer thing), my Dax McCarty (LOVE HIM) jersey and I grabbed leggings because the weather didn’t look like it was going to suddenly become nice Sunday afternoon. 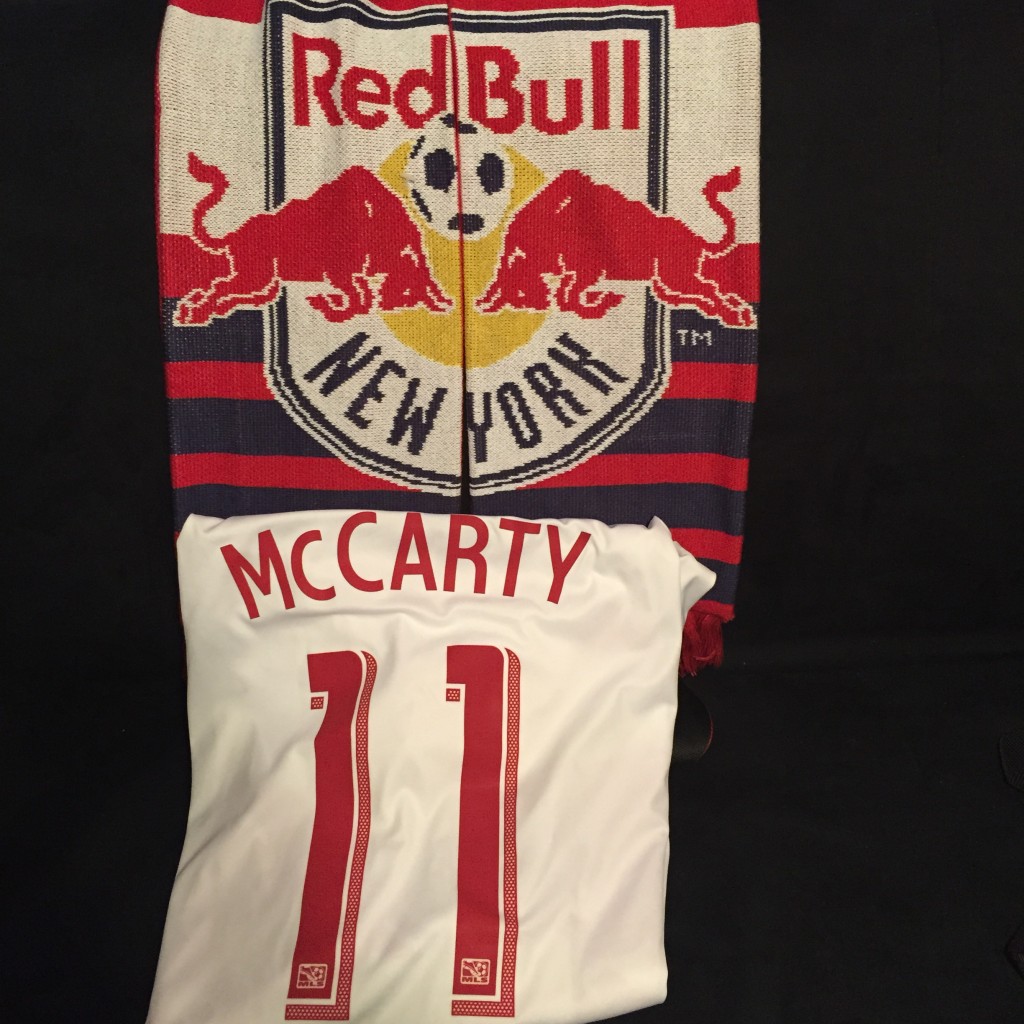 Sunday morning when I took out my dog (Baloo- newfoundland black lab mix) outside, I realized that A) the umbrella was over and not upright and B) that there was NO longer any kind of GLASS on the table top. WHAT?! We had a pretty rough night, the power went out, when I don’t know cause I was asleep, and that the tempered glass shattered ( like it’s suppose to), allllll over the grass. Cleaning that up right BEFORE going to church was really NOT any kind of fun let me tell you. After cleaning up most of the glass and putting down a barrier CA and I headed to our church (where we will be getting married next year) for 9:30 mass, and since we were running a bit late we headed into the Family mass, and O-M-G was it fun! The kids get up to sing, to listen to Pastor Tom read the Gospel and it was so cute interacting with him answering questions and everything. 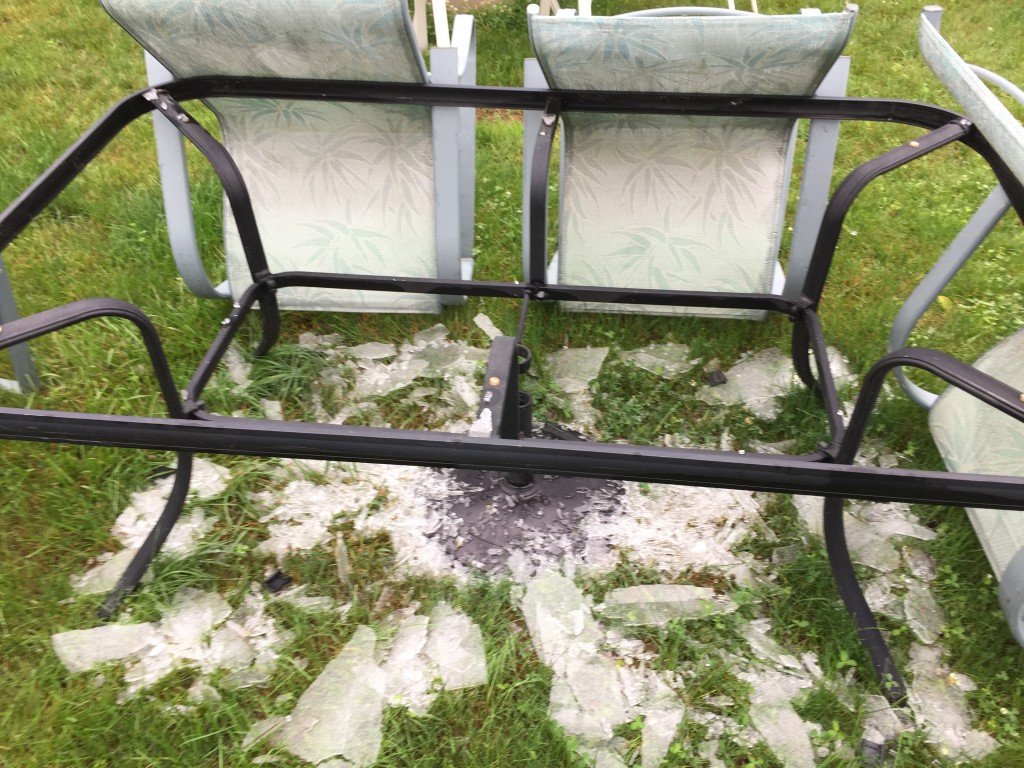 After church we grabbed a late breakfast headed home ate, and than I made a lunch/dinner before heading off to the Red Bulls game. We left for the game around 2 pm, they were playing their “Rivals” (I’ll explain more on that later) NYCFC (new team) at Yankee Stadium (NYCFC doesn’t have a soccer arena yet), so we needed plenty of time to get to the Bronx, park (expensive PARKING), and get inside the stadium (metal detectors make everything SLOW). 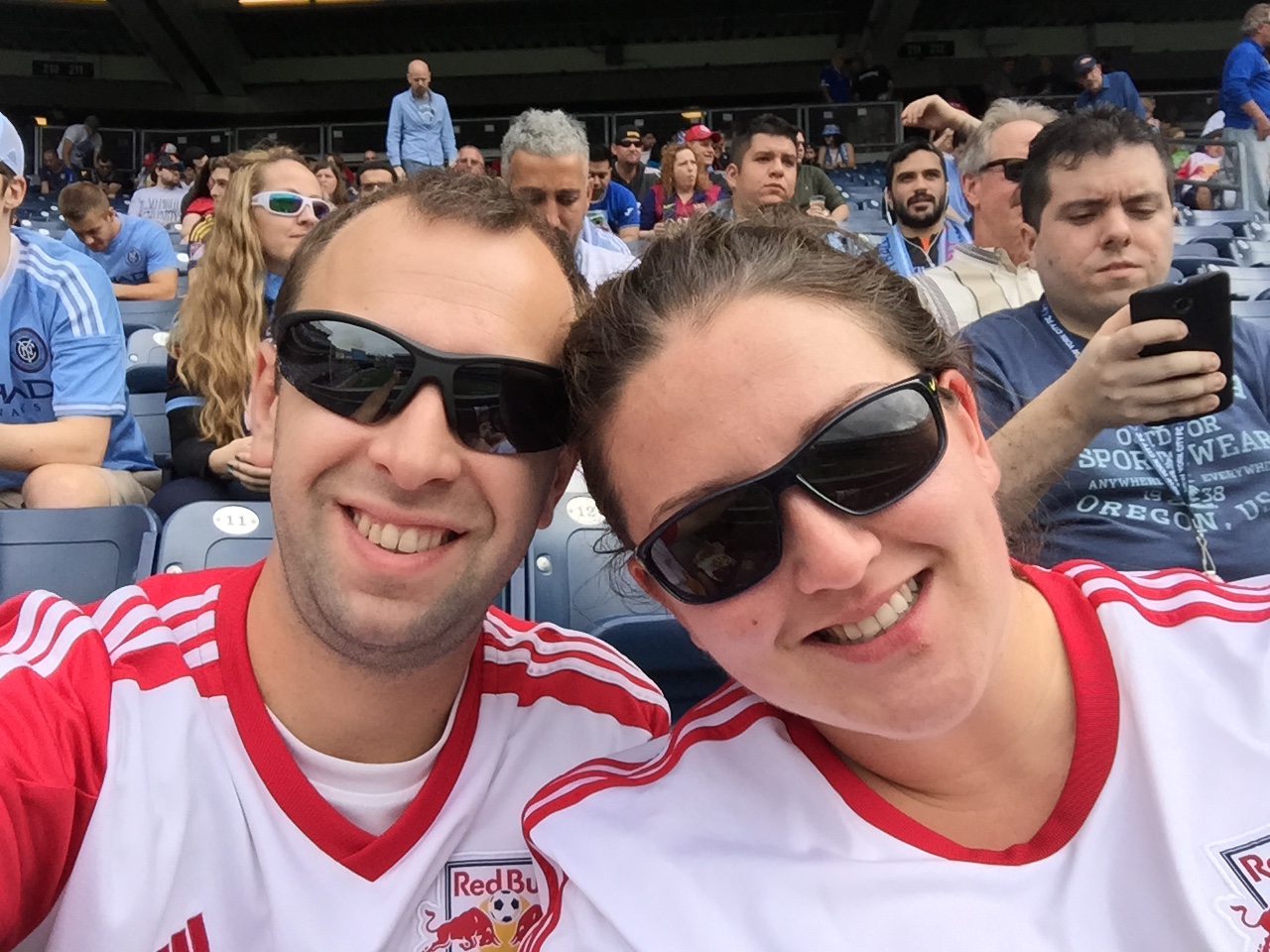 Before going inside we made the extremely brave trek into the Dugout- a Yankees pride bar… That was filled with hateful NYCFC fans, I’ve never been BOO’ed so much in my life, also being cursed at too. RBF was on point and I was basically ready to throw down with anyone that really had an issue with me being a Red Bulls fan. 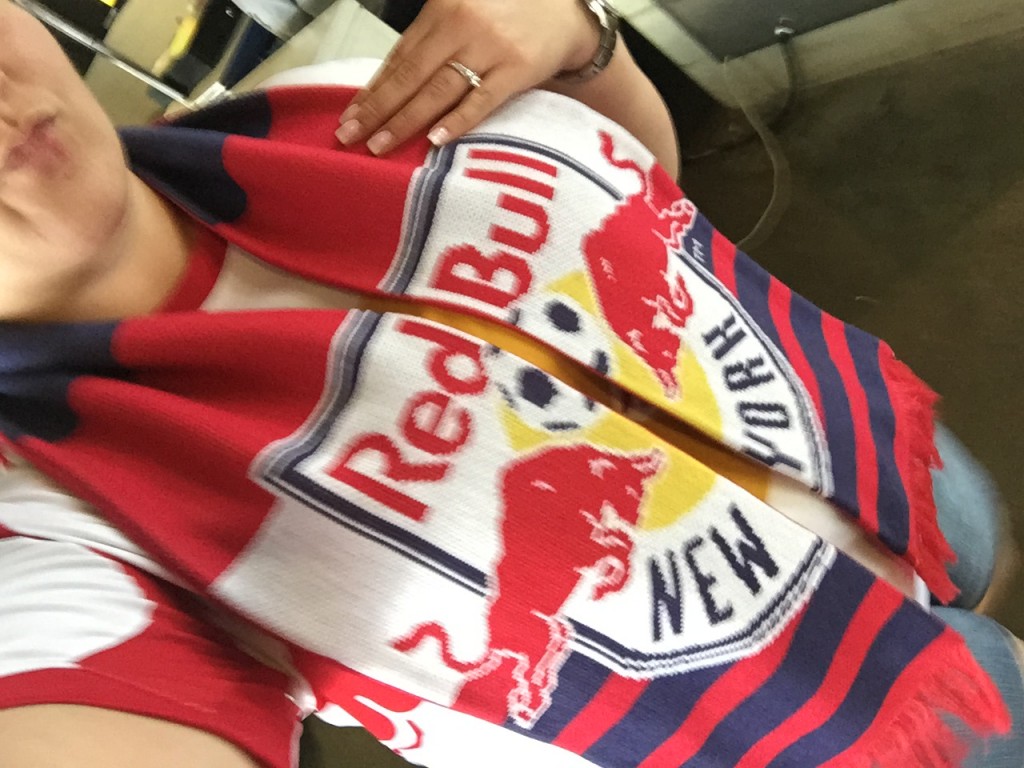 {That’s me taking a jersey selfie- the scarf is a soccer (futbol) thing, it makes you QUITE warm when trying to cheer on your team}

The first 45 mins were horrible, NYCFC scored 1 goal in the beginning of the game and it was rough the Red Bulls couldn’t score a goal. After 15 mins half , it started off with a bang, 1 goal, within mins a 2nd goal was scored and the RB were up 2-1 , before the end of the second half they scored the 3rd goal and we left the stadium with smiles :). 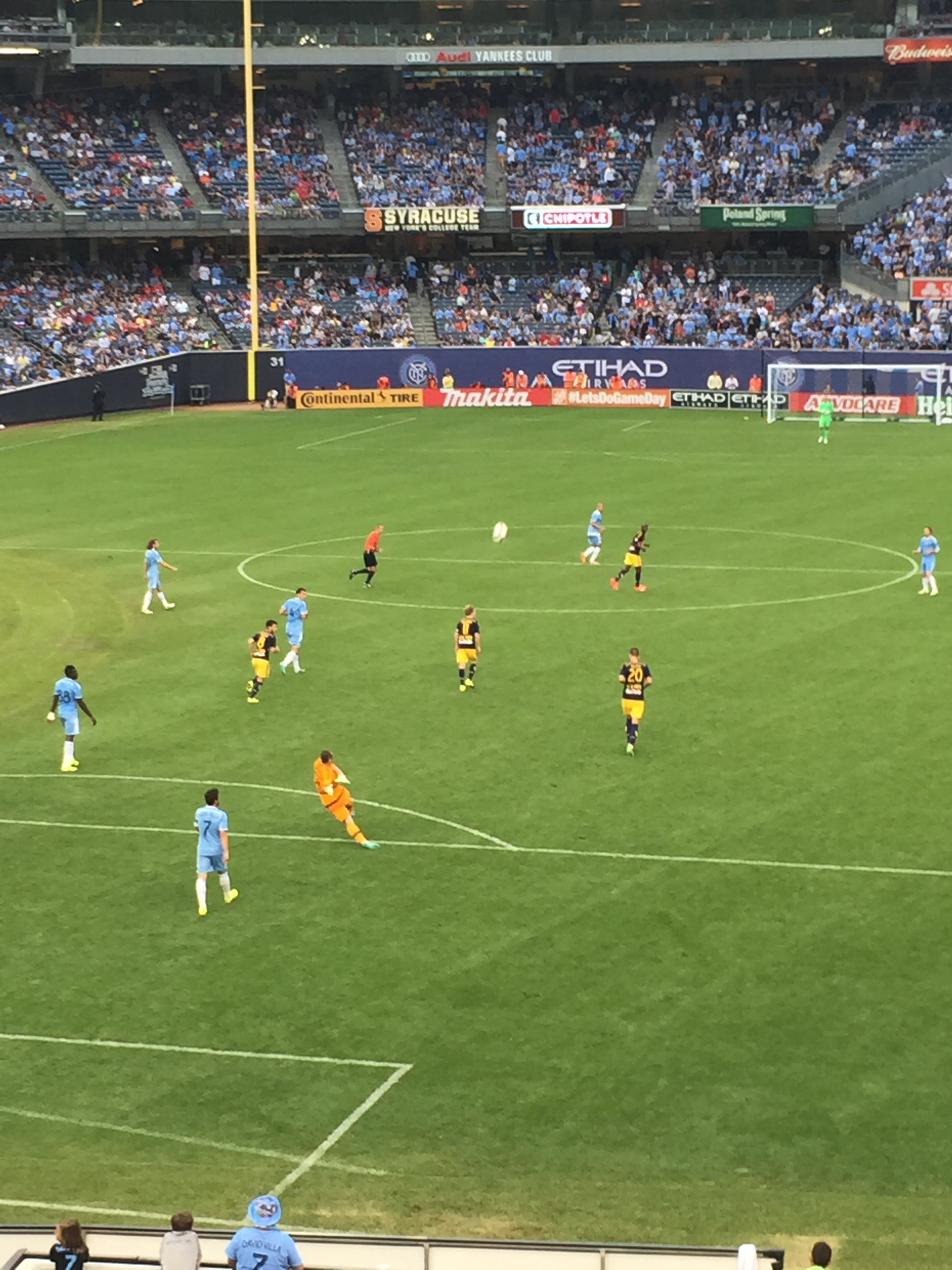 {The guy in orange is Luis Robles our amazing goal keeper, this was about 3 minutes before they called the game done. It was definitely amazing being in a big stadium with two awesome soccer teams. Red Bulls are in the dark blue jerseys, Robles and the team captain McCarty (my fav) were ushering all Red Bulls fans to get ON their feet to celebrate a victory that was both deserved and earned}

After the game we went to TGI Fridays and ordered more food than we could actually eat, it was good and than just crashed at home.

How was your weekend? Did you have better weather than me? 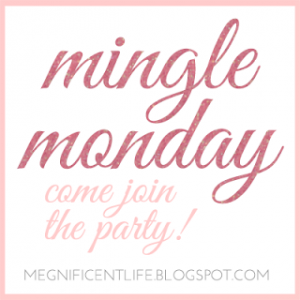 Looks like my kind of weekend! Love going to sporting events!

What a fun weekend, especially with those games. BUT that table 🙁 oh no!!

What a fun weekend! We saw the Yankees when they played the Indians like 2 summers ago. My son is a huge Jeter fan. Too bad he is retired!

You like the Yankees, your friend likes the Mets. You are both wrong. It’s all about the Braves, lol.

Sounds like a fun weekend. There is seriously nothing like live sporting events is there? We are going to a Red Sox game this weekend and cannot wait.

Sounds like a wild weekend! Bummer about the glass though… That must have been a bear to dig out of the grass. I’d have been muttering under my breath the whole time. – Jerusha, TheDisneyChef.com

Holy cow, you had a busy weekend! I love the fact that you are a girl who loves sports. I am a die hard Blackhawks fan, so this summer has been very good to me. Sorry to hear about your table–at least you can register for a new one with your upcoming wedding!

Most of my weekends seem to be blog work and house work. I always like to find time for a nap too.

Sounds like you had an amazing weekend! I love sporting events during the summer!

Our weather was rainy. I would’ve loved to hit up a sporting event or two, but it was my husband’s birthday and I didn’t plan much. A pretty low key weekend.

Sounds like you made the best out of a rainy weekend! Sure did a lot. So sorry to see your table though :

Looks like a great weekend! Shame about the table! Hope you can easily fix it!

Poor table. I bet that was a mess to deal with. It looks like you had lots of fun at the sporting event!

That’s the way to spend a weekend. Gotta take it easy with the moblike fans next time.

It dos sound like a busy weekend. Busy is good. 🙂 We’re having a laid back long weekend here. 🙂

What a weekend! You were on the go! I was cracking up at your secret for supporting the Yankees at a Mets game! Clever…