Happy 2019! I probably say this each year, but oh my gosh did 2018 fly by! I felt like it was over before I knew what was going on. It had plenty of ups and downs but it was definitely a wonderful year. Usually, by the time I write down my year in review it’s February or March so I usually never publish it. But I was so determined to get it posted by January 7th… as you can tell that didn’t happen… But better a little bit late than never! This post is V picture heavy, sorry!

January- This was apparently the month of rest LOL. I went looking through IG and my calendar, and we literally did nothing. Which is usually how the first month of January goes

February- CA’s favorite holiday, Valentine’s Day! HAHA, He calls it a fake/made up holiday, and usually I cook because he doesn’t need a holiday to show me how much he cares for me. I still get chocolates and a card because that’s my love language (the cards not chocolate).

March- This was the month of cars! I went to a Mazda event in Central Park, I was able to drive 3 of the Mazda cars as well as learn more about the company. I also went to the New York International Auto Show, with a Girls Guide to Cars. This was my 4th year and it was pretty awesome since I met with Mazda earlier in the month I knew the woman running the Mazda booth. As well as a few of the bloggers who were there, it was the most comfortable I ever felt at an event.

CA ran his (3rd) half marathon upstate and loved it. We had a great time, and we scored the perfect hotel. The start and finish line were literally right outside, so while I was waiting for him I was in the warmth of our hotel room!

April – My mom and I spent the weekend in Boston! It was so much fun, we also went to Salem, Massachusetts. We went to Cheers! Restaurant, ___ Market, took a Duck Tour, & went to the Aquarium. It was a bit chilly, and since my mom was still fighting a cold it was a low key weekend. But perfect for spending some mother/daughter time together.

We celebrated CA’s birthday for several days, we saw the Avengers: Infinity War movie, and spent the day in NYC. We went to the Intrepid museum, One World Observatory, and went to Osteria Morini for dinner.

May – Early in May I went to an event in Macy’s Harold Square for Marcus Samuelsson’s cookbook the Red Rooster. It was amazing to hear his story, and the recipes in his book are delicious! We went to a Yankees game, and spent mother’s day morning with a nice brunch with our moms!

We also celebrated our engagement anniversary in Greenport Long Island. Since we got engaged in 2014, we’ve returned every year and stay at the same hotel. CA planned a day of wine & beer tasting, ending our Saturday with a burrito night! We went to Bruce’s for breakfast like always, and as per usual, it was beyond delicious! We also hit Osprey’s Dominion, Kontokosta Winery, Greenport Brewery, and Orient Point before heading home!

June – We celebrated our second wedding anniversary with going to church, drinks and a delicious dinner at Buenos Aires in Huntington. CA had a few races that I went to and cheered him on, in one race he placed top 3 in his age group & 27th overall! We also celebrated my mom’s birthday with a yummy dinner at the Post Office which is in Babylon, Long Island. We also celebrated my friend Kimmy turning 25! She’s a massage therapist and does eyelash extensions, both CA and I are her clients.

July – We had CA’s family reunion at the beginning of the month in New Jersey. We went to a Mets game, myself my mom my aunt and CA. We visited N&K my brother & sister in law in Rhode Island for the weekend.

I went to a major event in the Hamptons! It was the Hamptons INteractive Influencer Brunch, brought to us by East End Taste and other sponsors. It was (hot) amazing! I was able to meet a few bloggers from Long Island and in NYC. I can’t wait to go back this year!

We went to a Manchester City game at MetLife Stadium in NJ. It was a great game even though they lost, it made us even more excited to see them in March 2019! I got my birthday present 2 months early with seeing Zac Brown Band! It was on a Saturday so we got to tailgate, and enjoy a fun night of dancing and singing!

August- CA had his friend Mike’s bachelor party in Daytona Beach over a long weekend. And a few weekends later I had the bachelorette party with Mike’s future bride and one of my best friends Caitlin! We went to Ocean City, MD! It was a wonderful trip, the weather was great and we partied, ate Domino’s and enjoyed each other’s company.

I put myself out there with entering in a Charlotte Tilbury look contest! I got an email asking to enter, they sent me the makeup and I entered! I didn’t win but it definitely pushed my boundaries.

September- We went to the annual NJBIIT of NJ BBQ… aka beer pong tournament. CA’s friends from UConn all get together Labor Day weekend and we love seeing everyone. The following weekend my cousin Alanna got married! It was a wonderful beachy themed wedding, and I met her now-husband for the first time, what’s really funny is that both of our husbands have the same name. He’s a great man and is so good to her.

Our friends John and Agata’s daughter had her first birthday! It was so much fun, and she’s such a big girl now, her personality shines through.

We celebrated my birthday a bit early just the two of us and went to two new places in Bay Shore- Drinks at Salt & Barrel followed by dinner at Corks & Taps.

The next day we had Caitlin’s bridal shower! It went off great, and she was showered with so much love and gifts. After the shower, I had a photo shoot with Danielle for my blog anniversary (which I totally skipped over- OOPS)  and my birthday! We had so much fun together, with the different things and hand signals!

For my birthday the 4 of us went out east, went to Osprey’s Dominion and Harbes Family Farm to pick some pumpkins and vegetables!

October- We had our 2nd of 3 weddings at the beginning of October. My cousin Matt married his beautiful bride Jenn! It was a fun ceremony and a wonderful reception! The next day we traveled to RI for my SIL’s birthday, it was a fun day trip and I was glad we got to spend some time together.

I attended back to back media events, first with Babbleboxx and all of the brands they work with! There were some amazing businesses there, and they had a rooftop area with a gorgeous view of the Empire State Building. At the second event, it was monumental- I met THE Erin Condren. Ya know the one who created my favorite planner? YUP, her. I died and went to planner heaven. I went a few new NYC bloggers that I still keep in touch with and I took a few fun pictures with Erin.

November- This was an up and down month, we had our trip to New Orleans plus our cruise to Cozumel. Costa Maya, Belize, and Honduras. New Orleans was beyond everything that I imagined it could be! I also worked with the NOLA Tourism Board which was extremely exciting! I plan on posting a few blog posts with NOLA details. And our cruise was perfect, we had so much fun on the Carnival Dream, the ports we visited we hand-picked as Belize & the Barrier Reef have been high on my Bucket List!

Unfortunately, we had to put our dog, Thor, down, he was very sick when we came home from our vacation. Either he ate something that did something internally that was too far gone by the time we took him to the vet. We were so blessed to have him in our lives, we just never expected to have him gone from us so soon.

Thanksgiving was fun, spent time with both our families like we normally do. Honestly, after Thor, I wanted this year to be done and over with because I needed the pain to go away. But that also meant the year is over, and it was a toss up of what I really wanted.

December- It started off with one of my Best Friends getting married (on December 1st)! It was an amazing day, we got lucky with the weather, and my Matron of Honor speech went off great! I was SO nervous because I don’t like the attention all on me and speaking in front of a lot of people I get so red. Besides all that, and me shaking, it went great, we laughed, and it was perfect. We dog sat for them while they went on their honeymoon, and celebrated their return with a sushi double date.

CA and I went to NYC for a photo shoot with the Brooklyn Bridge and downtown Manhattan. We also saw the Rockefeller tree and went to St. Patrick’s Cathedral for mass.

I went to a Trans Siberian Orchestra concert with my mom as a tradition. The show was hands down my favorite, and we had a wonderful time sitting 9 rows from the stage.

I definitely got this post up a lot later than I hoped, BUT it’s up! If you made it all the way to the bottom, you’re the real hero. What was your favorite thing that happened to you in 2018? 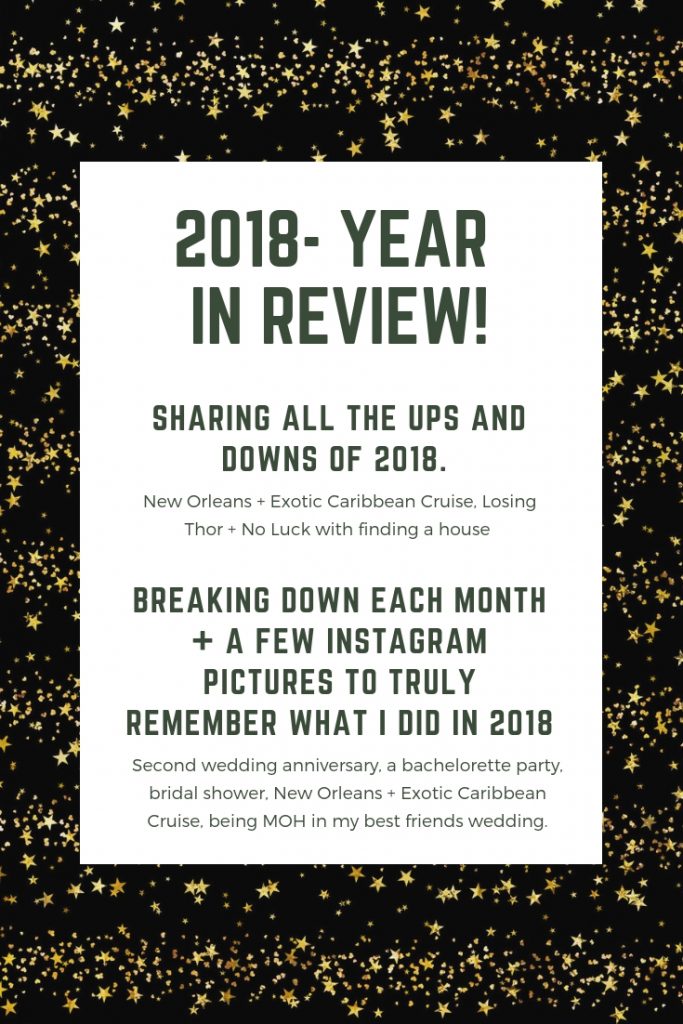