#mc_embed_signup{background:#fff; clear:left; font:14px Helvetica,Arial,sans-serif; }
/* Add your own MailChimp form style overrides in your site stylesheet or in this style block.
We recommend moving this block and the preceding CSS link to the HEAD of your HTML file. */
Subscribe to my mailing list

Another
weekend went too quickly, I like that this weekend was nice and cool, fall
weather. CA & I were in Six Flags New Jersey most of the day Saturday, we
bought Season Tickets for 2015, they included the end of 2014 and parking
passes. All we have to do is go at least once next year and we will have “made
our money back”, plus who doesn’t like roller coasters, and free parking!? We
headed to Jersey around 12 and were able to get into the park around 3 (after
stopping off at our hotel for the night); we had to get our season passes the
official ones, which took about an hour. I swear we picked the day that
everyone else decided to go to Six Flags, but that is okay, we had our passes,
and started our adventure. 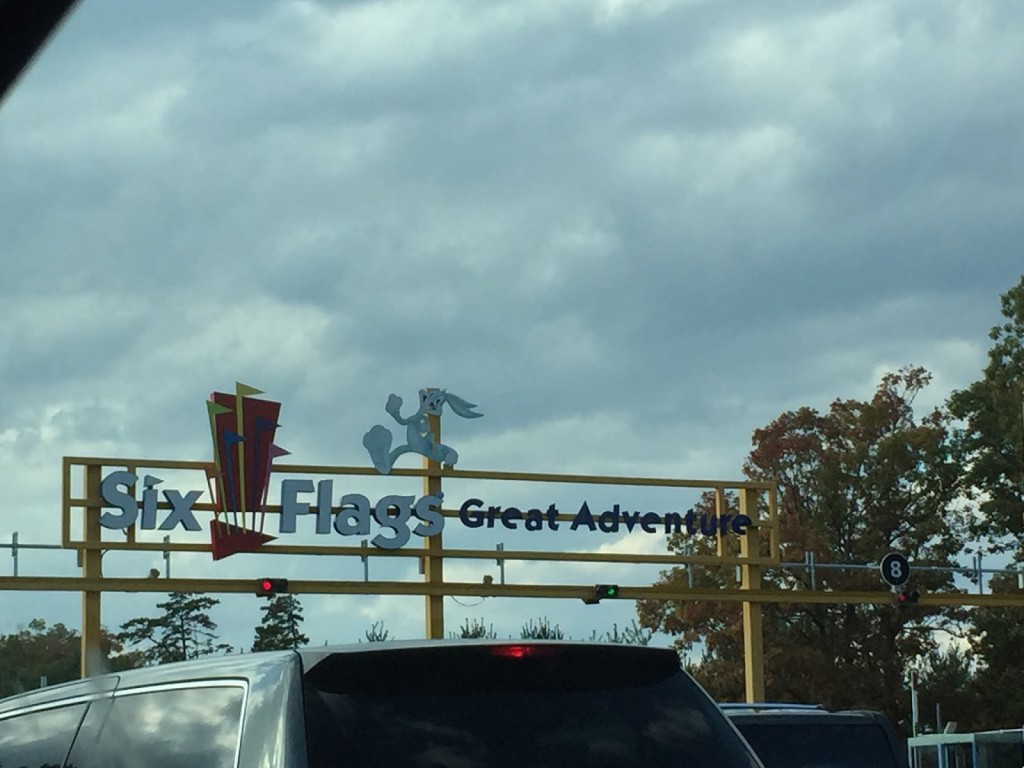 {we MADE it! Right before you pay for parking}
Even
though we’ve been together almost 2 years (wow 2 years…) this is only our
second theme park together, Universal (Florida) being our first. We headed to
our first ride being Superman, it was actually not running when we first went
in but it started running, we waited around 30 minutes and were on the ride! It
definitely felt… odd with being on our stomachs up in the air, it is a quick
ride (like all roller coasters) but this feels different because you are “flying”
so when you go upside down you are looking up at the sky. After that we tried
to go on the Green Lantern, which was a 2 hour wait (uh no), instead we headed
over to get our Fright Night tickets. Since we have season tickets I suggested
getting an upgrade for our Scare Pass, which is a “Fast Pass”, basically we
skip the line and go past everyone. It was a bit pricey to purchase but quickly
realized how worth it, it really was. We went on 2 rides that were right by
where you purchase the scare passes, the Manor & Total Darkness, both are
inside a building so they were able to be done during the day. The Manor was a
little scary, but more suspense than anything, but it was a little short for
what I had imagined. Total Darkness, was extremely creepy, it is literally
TOTAL DARKNESS, the only light you are allowed to have is the glow stick they
give you, which is attached to a rope where the entire group has to hang on to.
We shuffled through the maze like, and luckily everyone in front of the rope
(where the light is); got scared first so you knew something scary was coming
up. 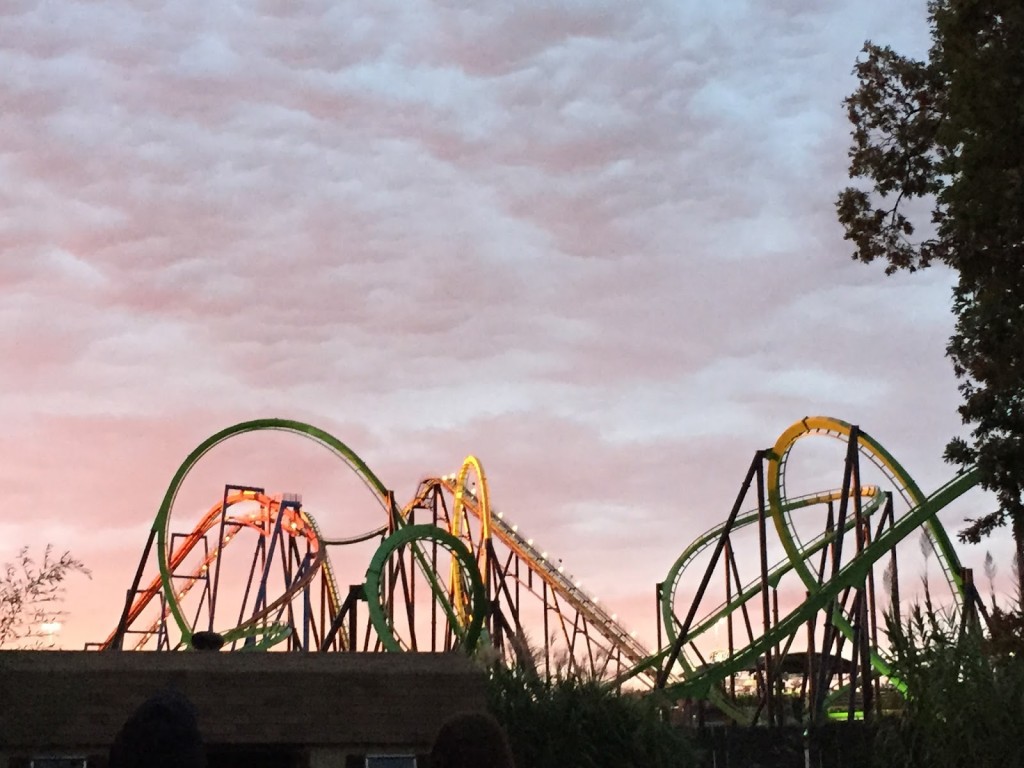 {a nice view of Green Lantern & Superman- with the pretty clouds/sunset}
After
those 2 scary attractions, we grabbed a pretzel and soda, and went across the
park to El Toro, which is a wooden roller coaster, with plenty of twists and
turns. We wanted to go on King Da Ka also, but that line was 2 hours (there’s a
trend with this magic number), and the ride… is basically 10 seconds long, you
are catapulted forward and shoot straight up, twist around go over a hump,
twist down, shoot down, and come to a stop. It’s really insane on how FAST you
are shot from zero, but it’s really not worth a 2 hour wait. We waited on El Toro
for about an hour (its CA’s favorite ride and I love it too), we finished the pretzel
and soda before going on the ride. We were lucky enough to get in the second
row with a short wait, and it was a blast, little rocking and rolling and definitely
a blast on the ride. 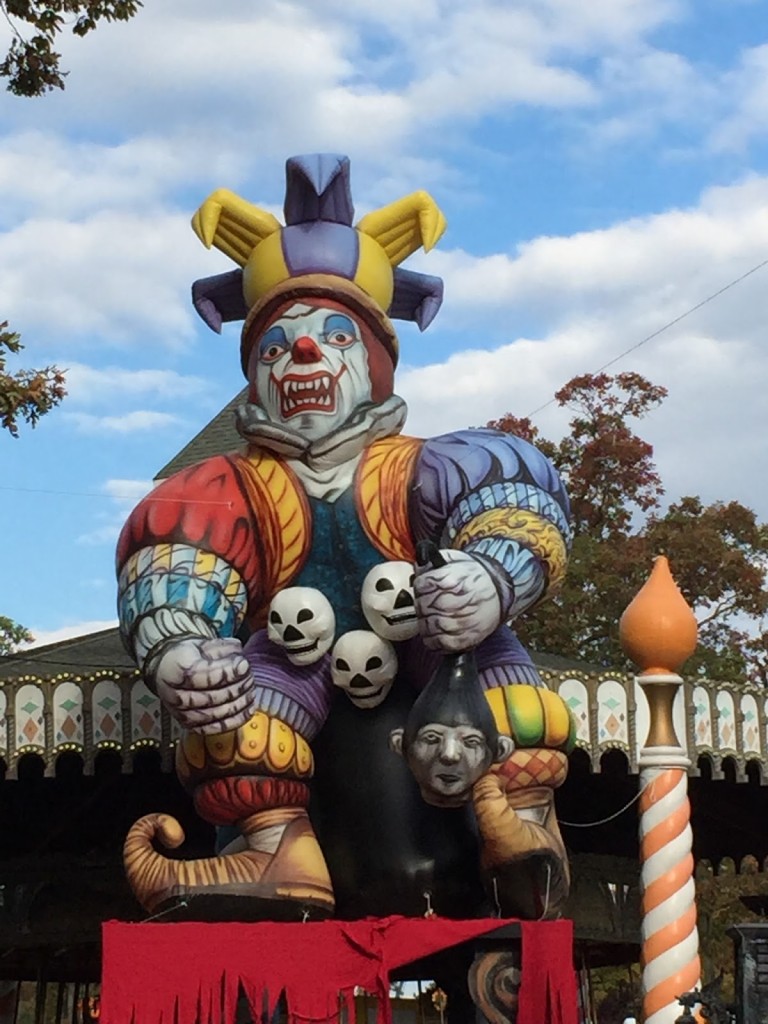 {if you don’t like clowns I apologize- this was right before the arcade part of Six Flags}
We
headed over to more scary attractions and went through Zombies, and decided
after seeing another 2 hour wait (told ya, it’s a trend) to just do the fright
night attractions for the remainder of the night. There was the Asylum &
Crop Circles (think Aliens)-which is newest one that they released this year.
There was another attraction but it was a 45 minute wait, with our scare pass
so with that being our last one we just decided to head back to the hotel. I unfortunately
had a headache and my feet hurt very badly (bad sneakers), so us waiting or
doing any other rides would have made it worse. Luckily CA was very happy with
the roller coasters we rode and the scary attractions we went through (which
was all but one), and he’s understanding as well. 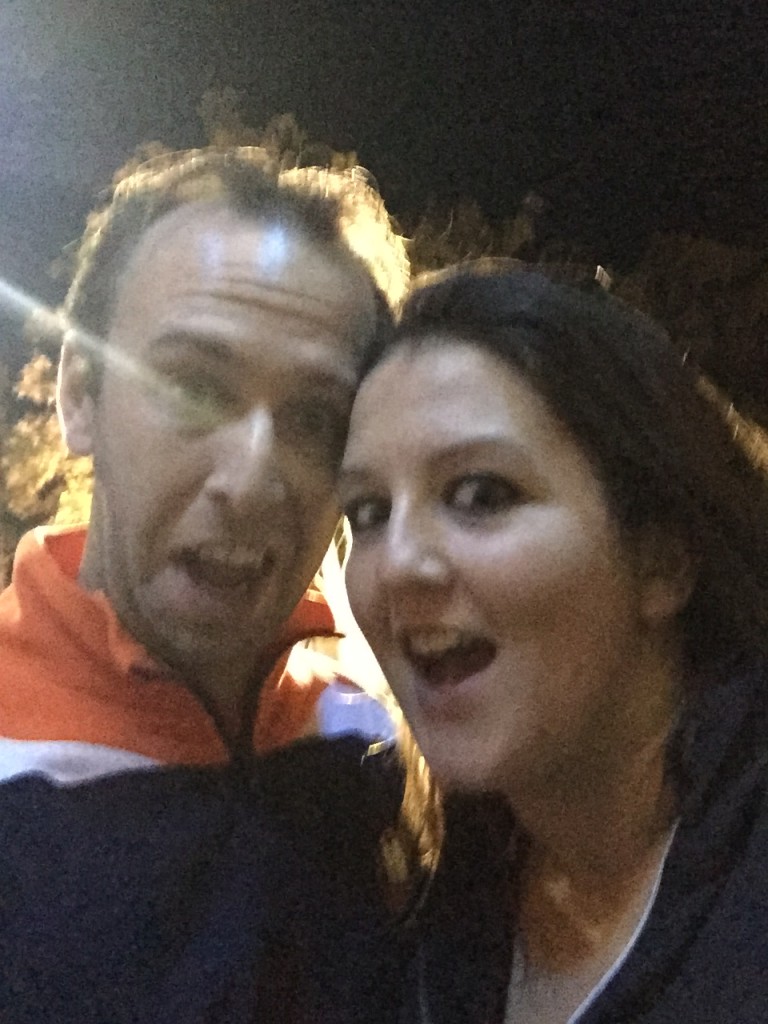 {our “scared” faces before we went into the Asylum attraction}
We
decided to stay over because with going late and staying later into the night,
both of us would be tired for a 2 ½ hour drive home. On our way back we grabbed
some food from Wawa, and just crashed watching some College Football. It was
very nice to not have to drive back while being very tired, we were able to go
back relax, and wake up very refreshed this morning, breakfast was actually
pretty good, and left our hotel around 12:30.
Sunday
consisted of football watching, blogging, and just relaxing the day away before
starting a new week of work and being busy. I am looking forward to getting
back to blogging, fitness & lifestyle related posts, also some wedding
thrown in there for good measure. I hope everyone had a great weekend and are
looking forward to the coming week!

Another thing I miss about living in NY, all of the amusement parks within driving distance. I love Six Flags. I'm so glad you & C had a wonderful weekend together! 🙂