!I am partnering with Drive Shop with this blog post, I was loaned the Toyota Two Eco Prius for One Week and to share my thoughts. We adventured to “The End” of Long Island, Montauk for a Winter Day Trip and we documented it! I’ll preface also by stating it was not “nice” weather, it was overcast, and the winds were around 20 MPH, and it was only 40 degrees (without windchill). 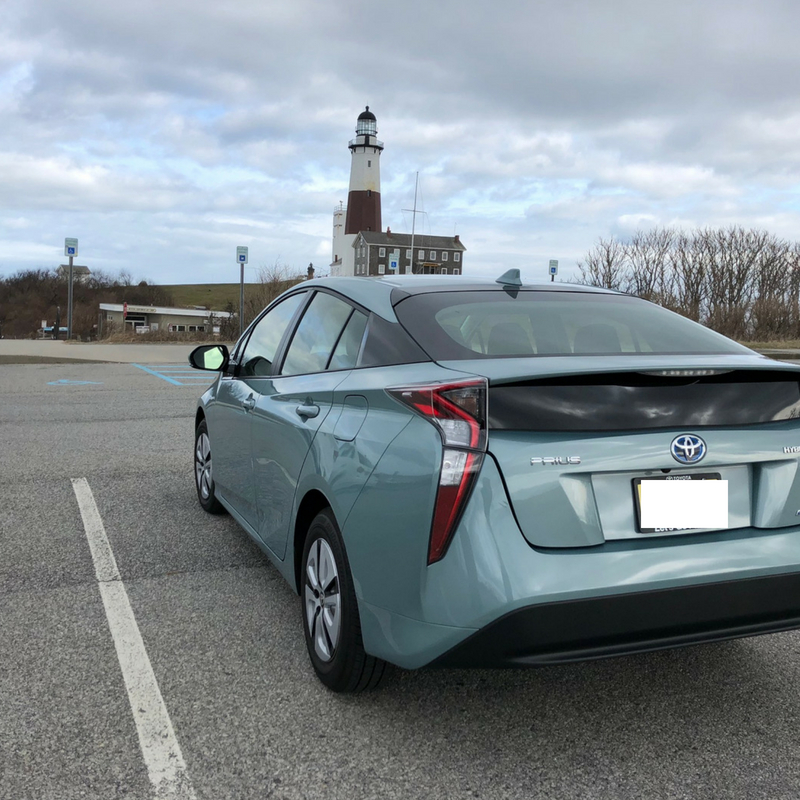 A Day in Montauk

CA and I have lived on Long Island our entire lives, I feel insanely lucky that on one “end” we have beautiful wineries, farms, the Atlantic Ocean, the Long Island Sound, the Hamptons, and Montauk Point. And on the other end, we have NYC, a bustling city that never sleeps that’s only one hour away. When Drive Shop reached out, and let me know I’d be receiving the Toyota Two Eco Prius, I knew I wanted to do a day trip out east. CA and I haven’t been to Montauk since we were young and began planning out our day. There’s one reason to go out to Montauk during the offseason, fewer crowds! During the summertime, Montauk and the Hamptons become a hot spot for tourists and become quite crowded. Since we’re lucky enough to live only two hours from Montauk we figured an offseason trip was the perfect way to act like tourists for the day and enjoy the day out east! 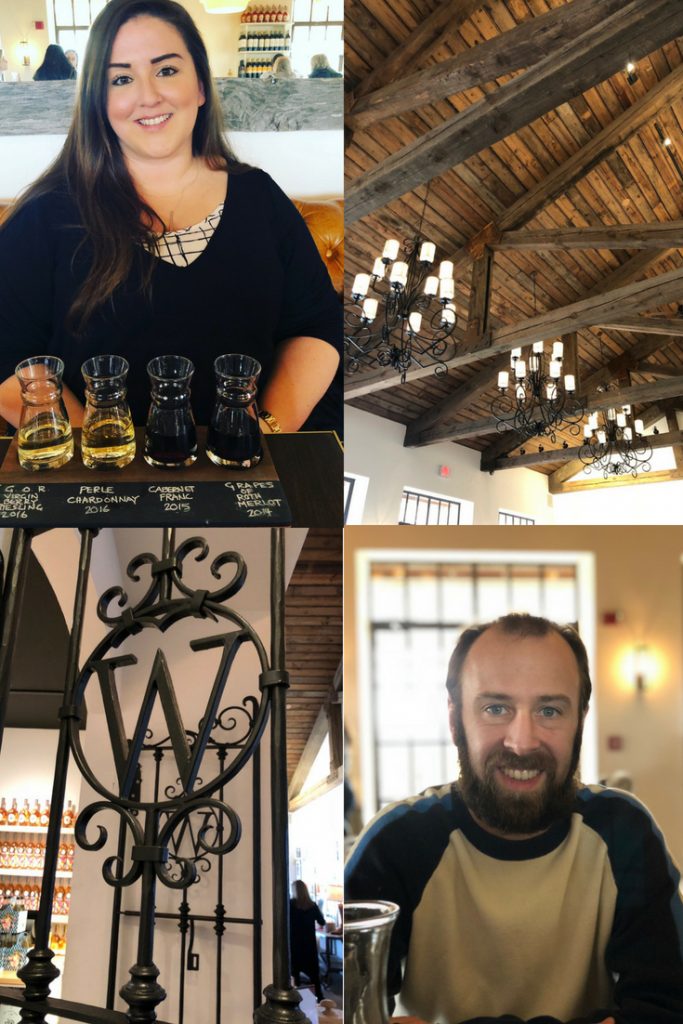 The Wölffer Winery is 40 minutes from Montauk in a town called Sagaponack, when you drive in you have the vines on either side, some mature and some new ones that have a blue covering to make sure they make it through the harsh winters. We were immediately greeted and sat at a table to have a tasting beneath gorgeous chandeliers and a peaked ceiling. It has a rustic touch to it, and I immediately fell in love. I did the Grand Flight, I was given a Riesling, Chardonnay, and two reds, the Riesling was delicious, it was the perfect combination of sweet and dry. The Chardonnay was very dry, and I realized this one would be my mom’s favorite. The two reds, the GOR was my choice, even though I don’t usually drink red wine.

We also took a behind the scenes tour and learned about the history of Wölffer Winery, which was amazing. We also were able to see the barrels the wine is stored in learning which wines go in what barrels and why. We also learned how they remove the juice from the grapes, each wine is made a little differently from each other. It was an amazing experience. 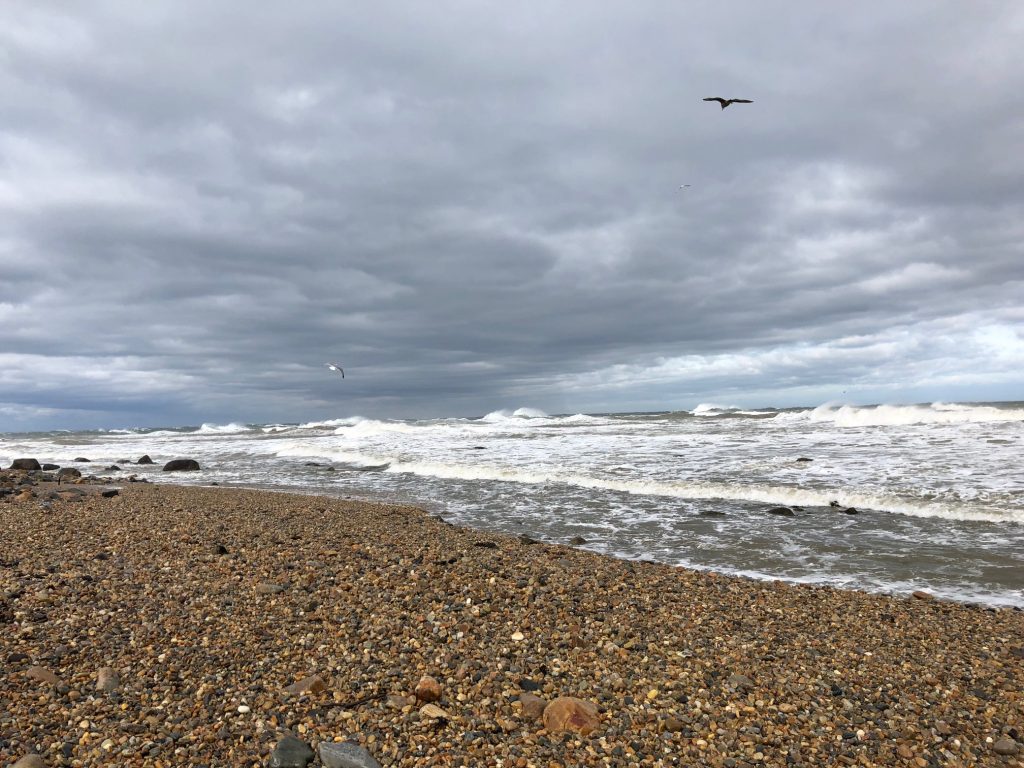 Montauk Point is a New York State park, and to be honest, I can’t remember the last time I was there! It’s also home to New York’s oldest lighthouse, which was finished building in 1796! Unfortunately, the lighthouse isn’t open until March 31st, but we knew this beforehand. If you do adventure out it’s $11 per adult, $8 for seniors and kids 12 and under are $4 (minimum height for kids are 41″).

The first thing I noticed was how large the waves were when we were approaching the end of the island. We knew it was incredibly windy just from being in the car, but we made the best of it. We bundled up, grabbed the GoPro and adventured to the shoreline. We walked down a dirt bath and ended right where

We stopped at the park to enjoy the gorgeous views and just enjoy being outdoors! It may not be summer weather but it doesn’t change the views! 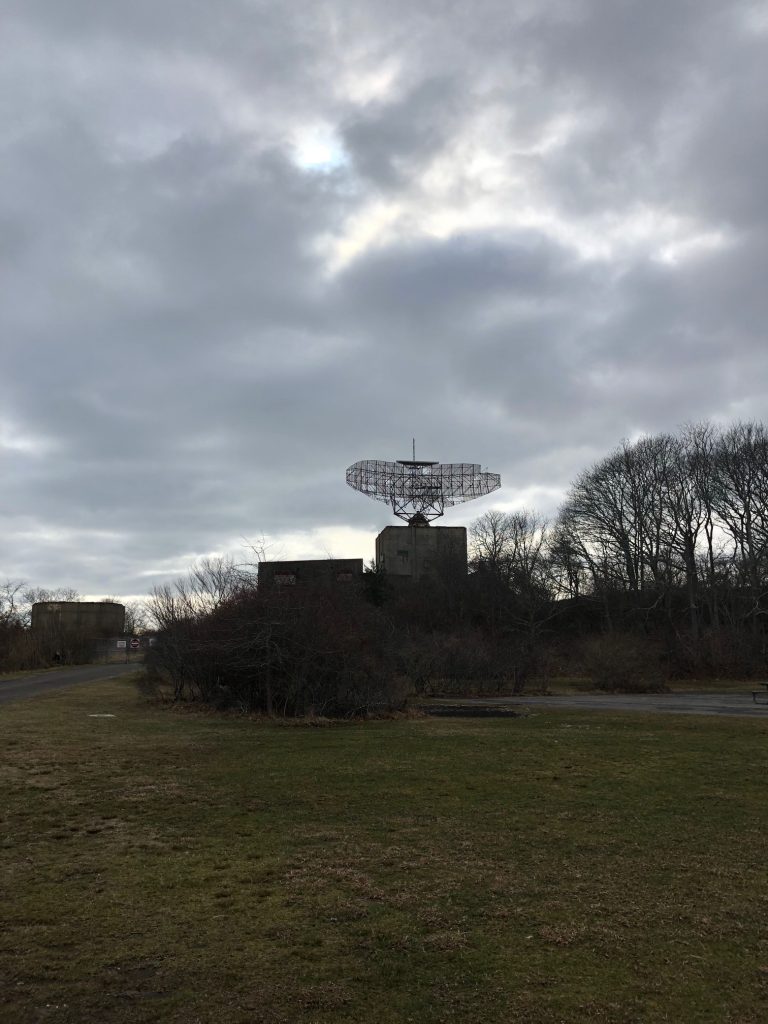 We had to stop at Camp Hero, it’s an old abandoned Military Installation, that was the inspiration for Stranger Things. The Montauk Point SP and the Camp Hero SP are connected so it was easy to walk from one park to the next.

If you want to read some more about Camp Hero and why it’s the inspiration for Stranger Things, head here, here, and here! 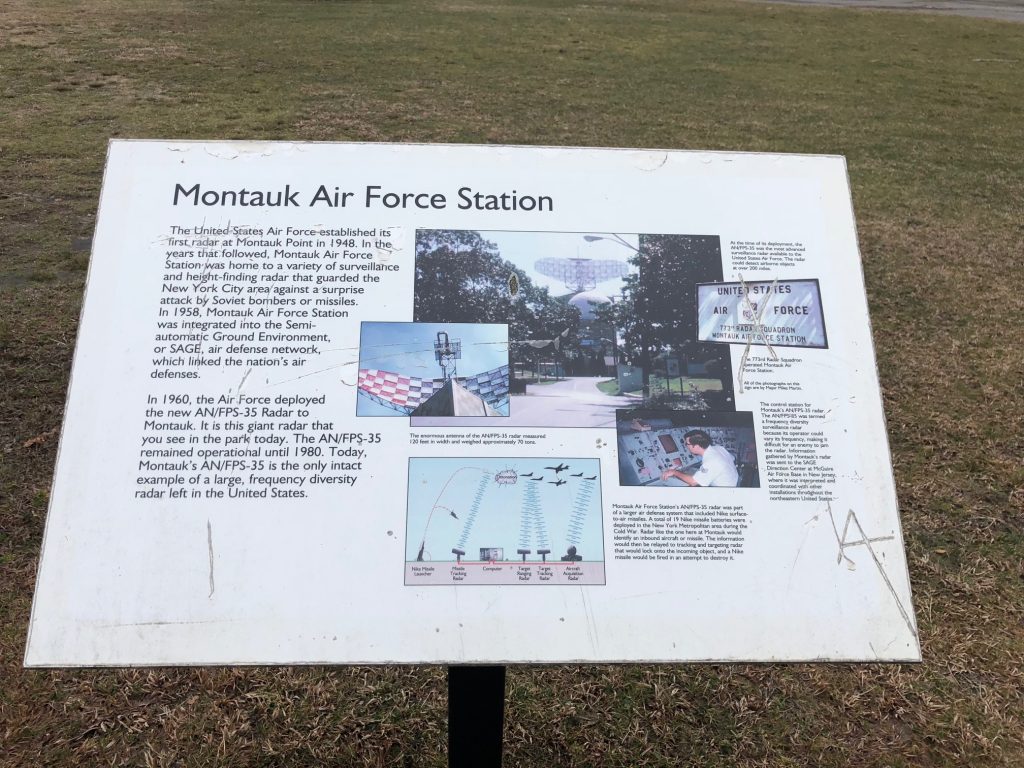 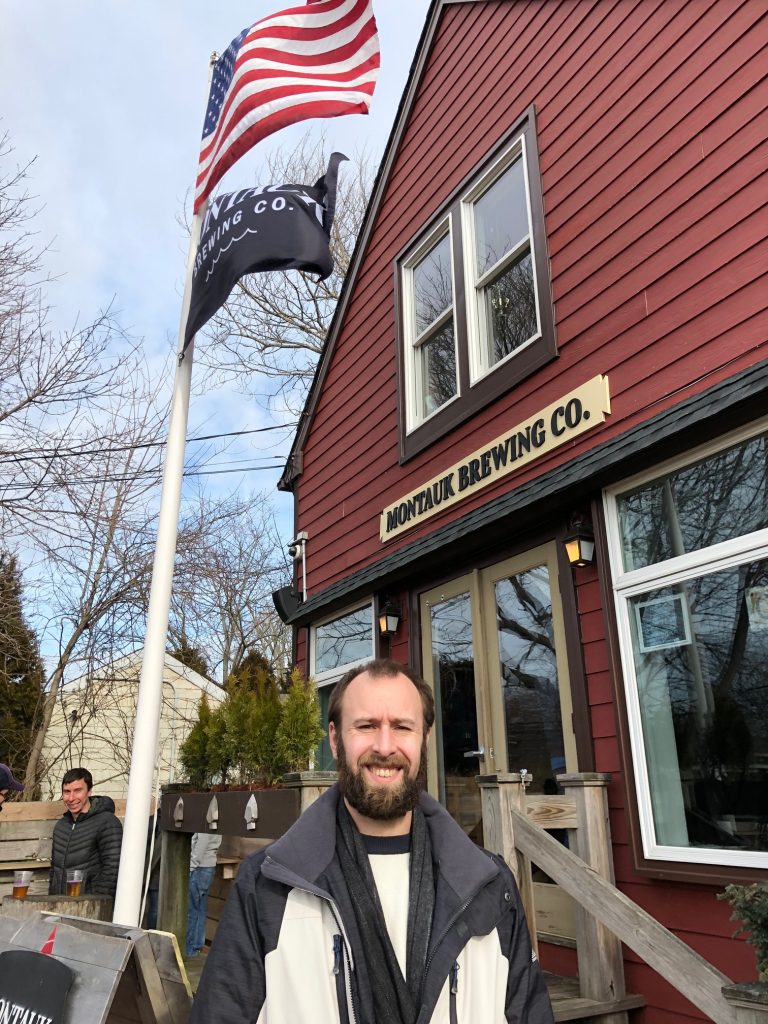 Another thing that Long Island does amazing, breweries! Even though I am not a beer drinker I’ll usually do a tasting with CA and what I don’t like he’ll drink. The location for the brewery is a small red building, with the beer being brewed in the same building. The Greenport brewery began the same way and has now expanded into a huge building. The inside was packed with people, the bartender was nice and was prompt to service anyone waiting. You get a flight for $16 (also known as a tasting) 6 out of their 8 beers, if you know a beer you don’t like (like IPA or Stout) you can skip that and try another one. CA liked most that he tried, and he got to keep his tasting glass that says Montauk Brewing Company. They have a brick patio that is perfect for when it’s nicer out, and some people were even outside when we went.

If you need to know one super important thing about me, it’s that I have a strange obsession with burritos (and if I was rich I’d have a barn filled with all the dogs from shelters, anyways). So when I was looking for places to eat while we were in Montauk I saw Gringo’s Burritos and was immediately intrigued. The one “down” side to being in Montauk in the offseason is that some places are either closed until Spring/Summer or are only open for dinner time. Unfortunately, Gringo’s was closed so CA searched and found La Fondita, which was on our way home, we even passed it driving to Montauk. Since it was already 3 we decided to take it to go, I had a burrito (obviously) and CA had these amazing nachos, YUMMMM. The food was delicious, a tad messy (we knew it was a possibility eating in the car), I’d definitely go there again in the nicer weather and eat outside.

And we headed home! It was a great day!

The car we drove- the Toyota Two Eco Prius 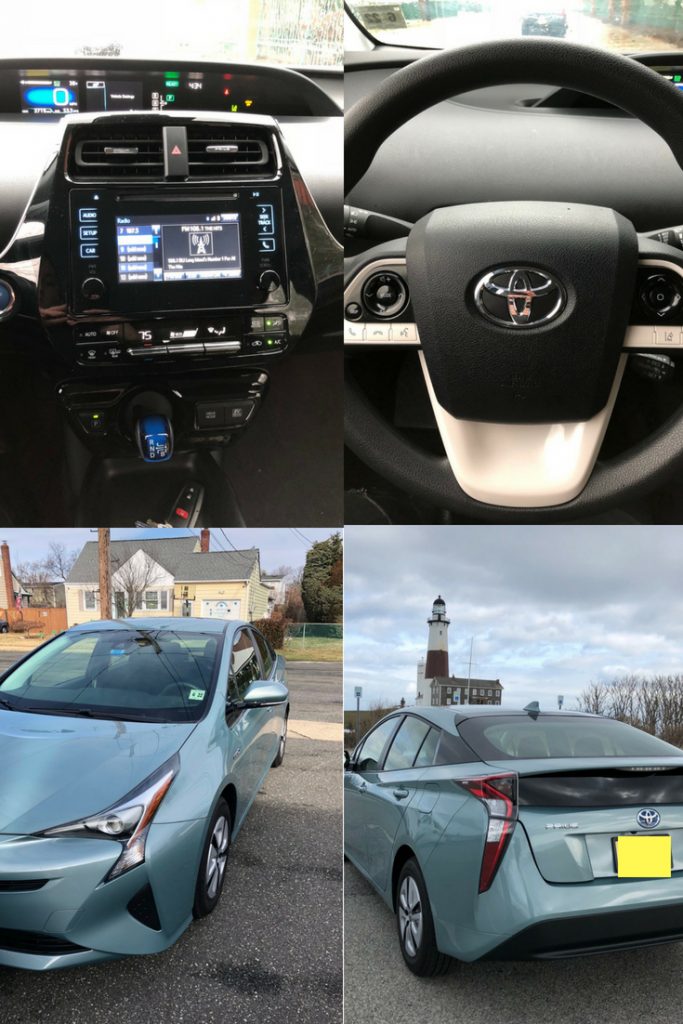 After driving the Toyota Two Eco Prius for a few days I wanted to see how it would do on a longer trip. Our first stop is 65 miles from home, the Eco Prius is a hybrid so you have an internal-combustion engine wedded to an electric motor, the latest version is both stylistically and technologically leaps and bounds better. The latest Prius now has lots of competition, but it remains the segment’s fuel-economy leader and is bolstered by a new model, able to travel up to 25 miles solely on electric power (how cool is that?!).

One of my favorite things about this Two Eco Prius is the lane departure warning and adaptive cruise control. This is especially helpful on a long road trip where you’re on a long stretch of a road such as Sunrise Highway (one of the ways to the Hamptons & Montauk). Since it was the beginning of March there weren’t that many cars traveling out to Montauk, we were able to set the cruise control while knowing that the car would alert us to another vehicle coming within range and automatically adjust. The lane departure is also great to have and an adjustment in itself but I loved knowing that we were safe on our adventure.

The middle of the car is where everything is, from the heat control, parking button, the center console (which also displays the backup camera), including the speedometer and menu center to adjust anything in the car. I loved having everything right in the middle of the car within reach of both the driver and passenger. Not to mention being able to control music, volume, making phone calls, turning on/off lane departure warning and adaptive cruise control.

I never drove a Prius before so this was a first, and I loved how big the inside of the car is. CA and I both had plenty of leg room in the front seats without crowding the backseats which are perfect when it’s more than just the two of us traveling. I was amazed by how much truck space was available! We didn’t need to bring anything with us besides a small cooler so we didn’t get the chance to utilize the trunk space but I can only imagine how much can fit into that space, especially when the back seats have the ability to fold down.

Having the Toyota Two Eco Prius for a week was a learning experience, as a fan of Toyota already with the technology and affordability (plus I drive a RAV4 currently). I also have never driven a Hybrid before, I loved that on the short travels commuting from work or to the gym, I was using almost no fuel. It’s economic friendly and for the short drive that I am currently having to commute it makes sense, as well as when we find our home my commute will become between 20-40 minutes long. CA has also been thinking about leasing a hybrid and even more so the Prius, it is similar to the car he drives now, still with ample space for the driver and passenger alike and trunk space.

Do you drive a hybrid or have ever considered test driving one? Have you ever been to the end of Long Island? Montauk and the Hamptons are an amazing place to visit, you just need to be conscious of when you are going and what will and won’t be open. 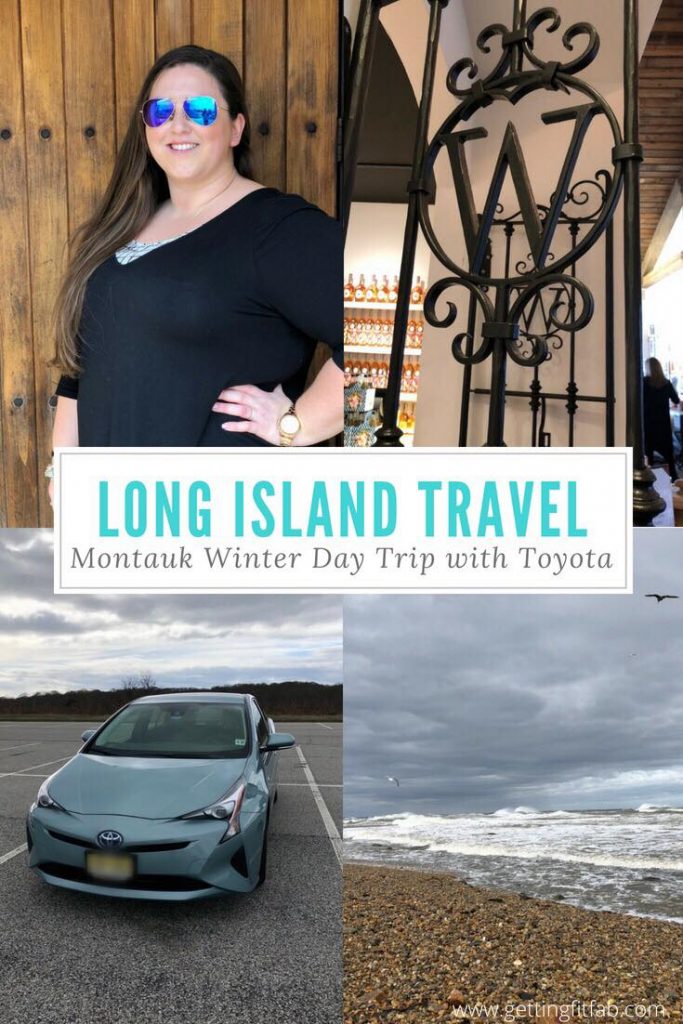