So… If you’ve been reading my blog for a while, you’ll know I’m already married. CA is the husband, and when we first got engaged I told our story. Since getting engaged and married my blog got a huge upgrade and it was switched from Blogger to WordPress, and some older pictures didn’t make it. Anyways!

It was May 16th, 2014, it was a Friday night as we headed out to Greenport, Long Island. Greenport is located on the North Fork of the island and is the location of Long Island’s Winery Trail. After work, we headed to Greenport where we had dinner at Sakura sushi restaurant. We had a delicious meal and headed to the Silver Sands Motel to check in and turn in for the night. We had a busy day planned so we called it a night soon after dinner. 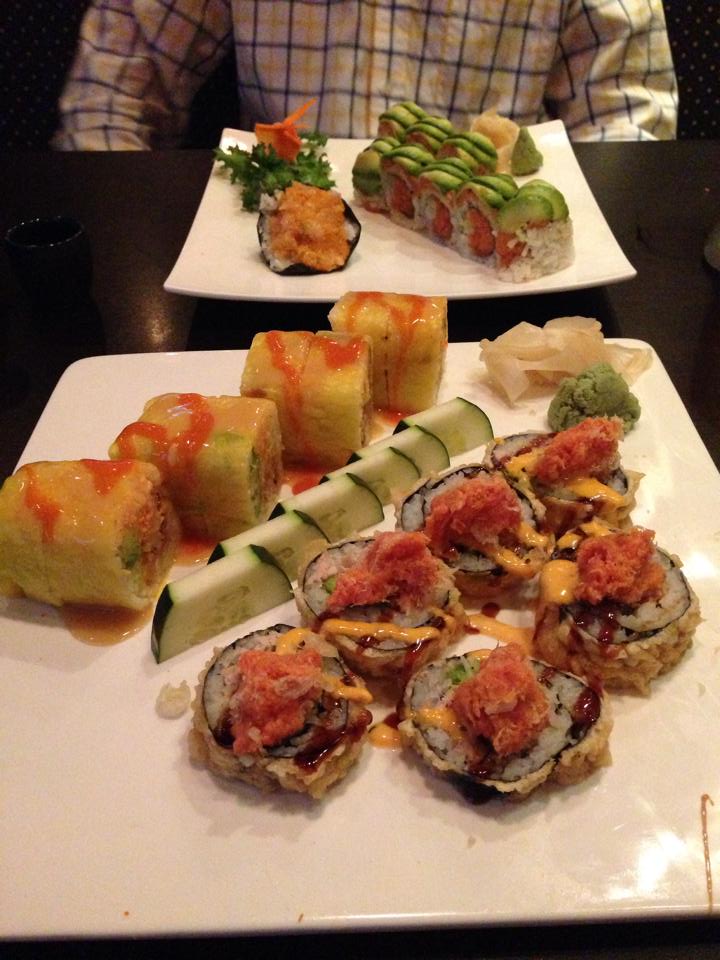 (Before breakfast in the room we both headed out to run, but we did it separately, I went first than CA went… while he was gone I took a shower to be ready before he came back… this ties in)

So we had in-room breakfast from the hotel and made our way to the Shelter Island ferry, so explore and walk around. We decided to not take our car across and just walk around, we found a little cafe to eat breakfast and walked around some more. We took a few pictures and then headed back to Greenport. 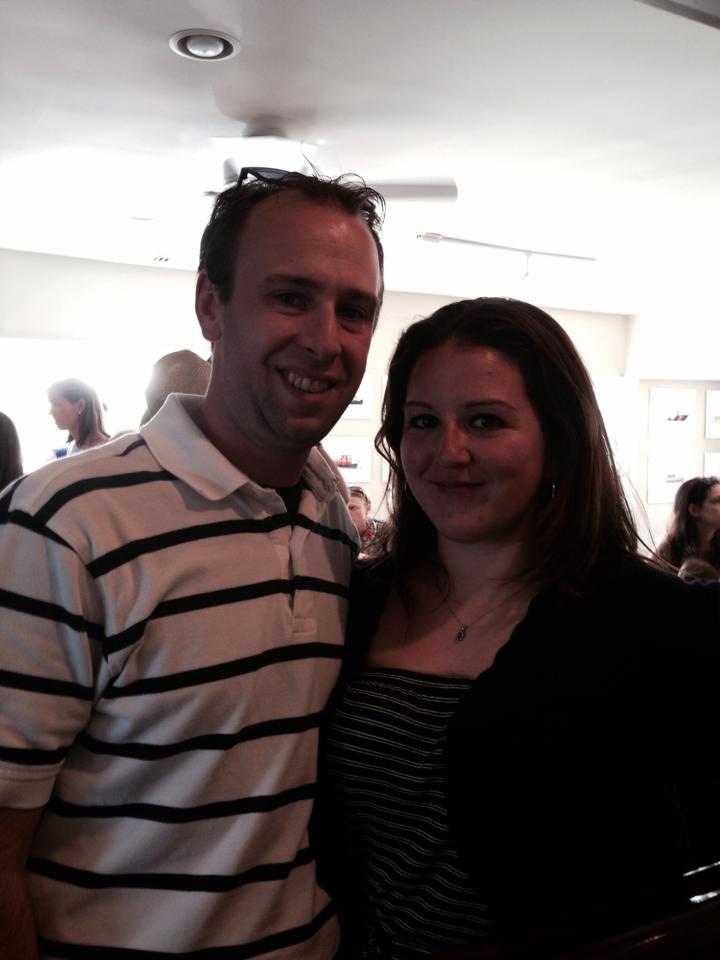 (I had a mouthful of pretzels LOL)

Our second stop was Greenport Brewery (the original location) my mom had won a tasting at an event she went to and gave it to us. <~ This was also the “reason” we headed out to Greenport in the first place, to do the tasting and since it’s over an hour away we made a weekend out of it… No other reason *wink* The original was a small area on the second floor of an old firehouse, the beer was delicious, and we had a great time. After the brewery, we headed to a winery called Kontokosta which is also in Greenport. Kontokosta looks like a giant barn from the outside, with the vines sprawling out, and a large lawn. Past the lawn, there is a large bluff you can look down to the Long Island Sound, and just take in the beauty. 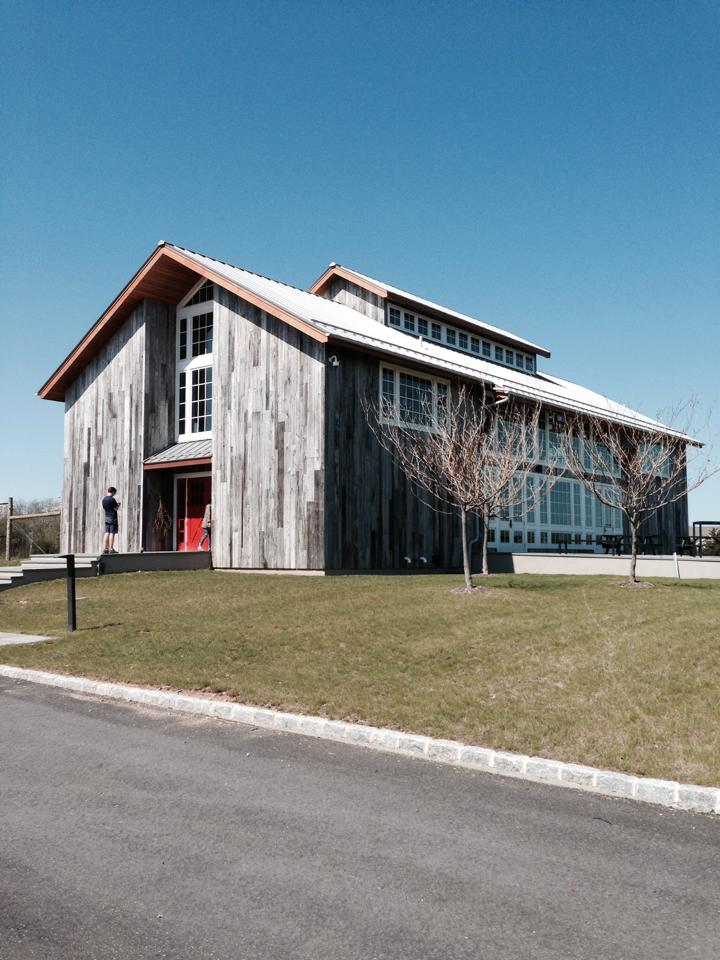 After tasting beer and wine we headed back to the hotel to snack on the goodies we bought and take naps! After naps, we started to get ready for dinner which was at 8 pm… So… without me knowing it before he went for his run that morning, he spoke to the 4 women who were in the room next door to us. He let them know he was going to ask me to marry him that night, and he asked them if they minded taking a few photos for us since that was one thing I wanted… a photo of the proposal taking place. They said yes and that they would meet us at the water (the motel has its own private beach) at 7 pm. So as we’re getting ready I realize my straightener, is broken, it just doesn’t work! CA asks me a few times if I want him to run out and grab me a new one, saying since we’re taking pictures (hint… not just pictures) that he knows I want my hair to look its best. He also didn’t want me to NOT take pictures cause my hair wasn’t straightened)  Luckily it was straight enough and I just worked some magic with my hairdryer.

It’s around 7, and we head down to the water, he says oh I forgot my phone and goes back into the room, he didn’t forget his phone, he needed to get the ring without me seeing it. ALSO since the ring was in a ring box he was worried I’d notice it in his back pocket so he always made sure he was behind me. He asks the nice women (the ones he had asked previously) if they’d mind taking our photo, the woman closest to us went with us near the rocks.

This was our *test* photo

This next part is funny, we took a few photos, and then CA went to go make sure they looked okay, LOL. Since it was 7 pm and the sun was setting he wanted to make sure the lighting was okay, and that you could see us in the photos. 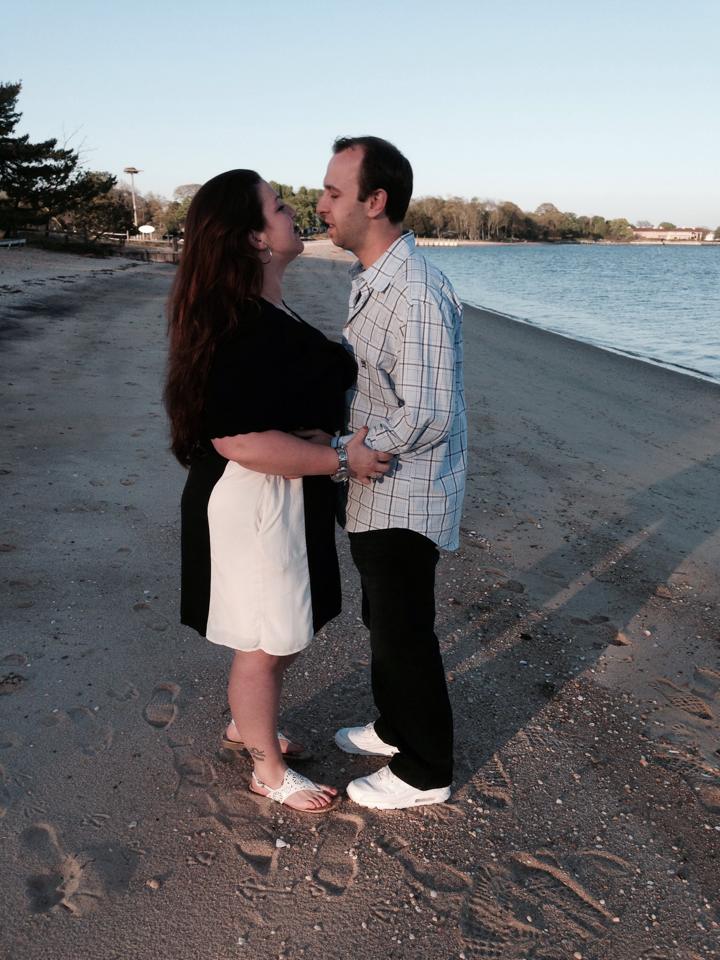 I literally asked him… what are you doing?

He came up to me gave me a kiss then dropped to one knee and started his speech. From what I can remember he said I’d never be bored, he’d never be a Yankees fan and that he’ll love me more every day. He asked me to marry him, I said YES and we kissed! A few kids cheered, and the woman who was taking our photos and a video, she gave us both a hug and congratulated us! Her friends even got a few photos from further away which was also special! 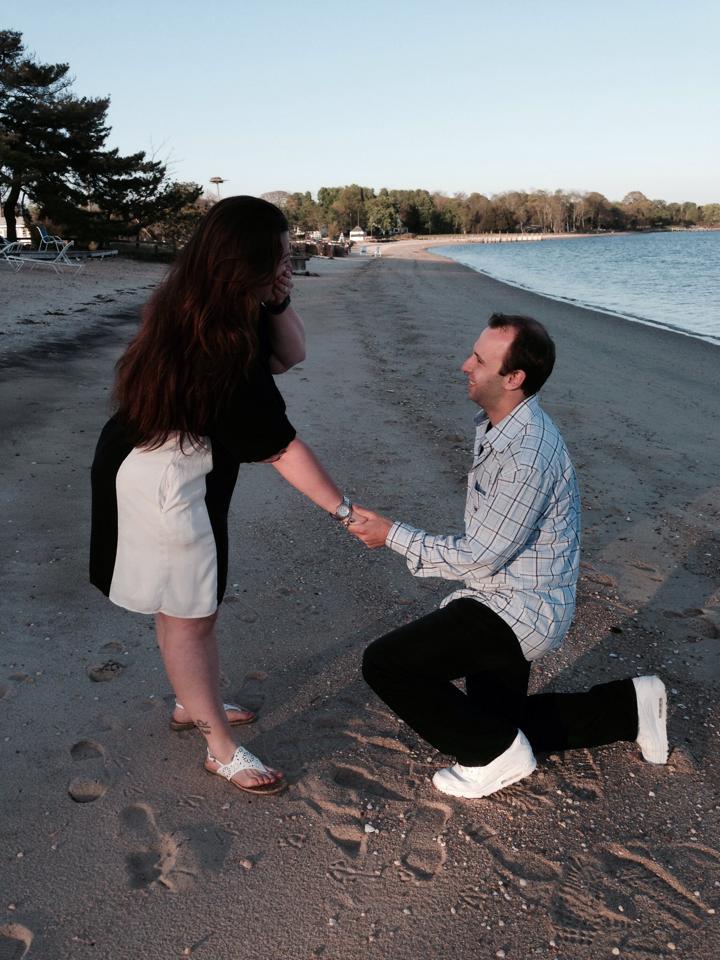 And I lost it… I thought I could hold it together, but NOPE

We called our respective families and friends, our immediate families already knew that he was going to ask because the following day they were having a little celebration party for us. After talking to everyone, I fixed my makeup and we headed down for dinner. I won’t dwell on it, but dinner wasn’t “good”, the food was fine but expensive, the tapas were more like half tapas, and the service was sub-par. We made the best of it, celebrating our engagement and just enjoying our dinner. After our subpar dinner, we headed to the ice cream parlor down the street and it was delicious, the cones were huge and we enjoyed acting like kids for a moment.

We had breakfast at Bruce & Son’s Oh My GOSH, this breakfast place is delicious and so good! It’s a small place but it’s so worth the wait! We enjoyed our breakfast, checked out of our hotel room and headed to Osprey’s Dominion in Peconic. We saw our friends Matt & Calynne who were the first of our friends to see us after getting engaged. We did a taste testing, enjoyed some delicious wine, I found my favorite Riesling (it’s still my favorite to this day), and enjoyed the country music they had playing. After “waiting” for it to be late enough we headed to the party! I had no idea about the party, but when we pulled up our immediate families were there waiting with open arms to congratulate us both.

The party was perfect for everyone that was there was who we’d want to go see in person when we got home, so it made it simple. We enjoyed good food, good company, and great cake. After the party we headed to my house and proceeded to pass OUT, I mean it was like 7 pm and we just fell right to sleep LOL. Some party animals that we are! 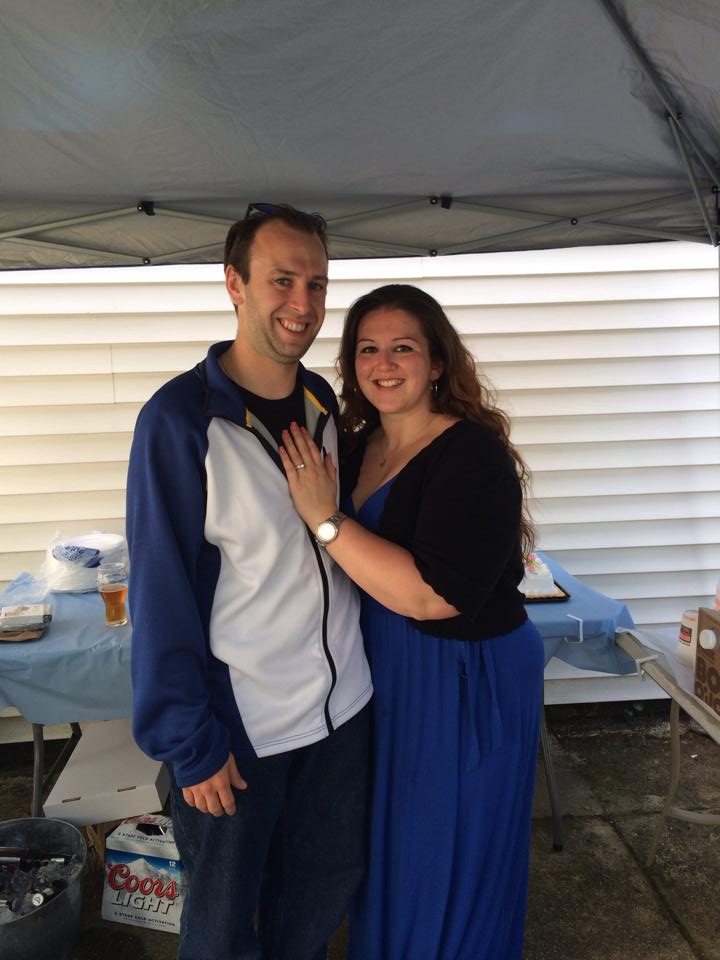 Overall it was an amazing weekend, we made some amazing memories and we “relive” that weekend every year since we got engaged. This weekend, we’re going to Greenport, staying at the Silver Sands Motel, and doing a wine and beer tasting tour of our own. We try and visit new places each time we head out there and this time I’m excited about all of the places we’ll be going to. We’re also going to hit our favorite spots, Greenport Brewery (Peconic location-bigger spot), Kontokosta Winery (the view is my favorite part… plus it’s a barn), Bruce & Son’s  (because the breakfast is to die for… get the waffles or the pancakes), and Osprey’s so I can get my glass of Reisling (and the music is always fun to listen to).

Whew… that was a long one! I’m glad I could re-share this story, I loved telling it to literally anyone that asked, so it’s fun to re-share it after 4 years. If you want to see each place we’re going to you can follow me on InstagramInstagram, and I’ll be posting to stories about what places we’re going to on Saturday. And Sunday we’ll be hitting our favorite places before we head home (that’s our usual MO)!

To CA, if you’ve read all the way down to here, I love you so much. I am so happy we’re celebrating our engage-versary again, and that we’re able to do these adventures together. 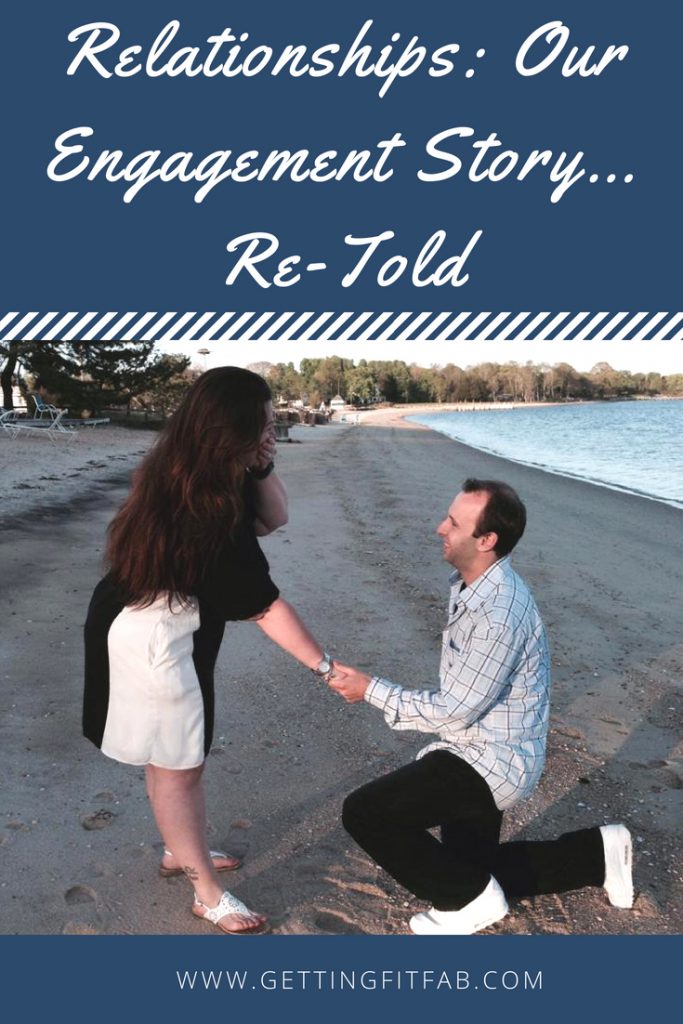 […] with Long Island, Greenport is on the North Fork all the way out east. It’s where we got engaged (our engagement story), and since then we travel back and relive the moment and discover new places to go! Since it was […]

0
Reply
It's Gonna Be May... A Monthly Recap

[…] We go around the same weekend that is our engagement anniversary which is May 17th, you can read our story here. We usually go to different wineries, breweries, grab food somewhere, go out or stay in for dinner. […]

[…] wanting to do this style of post forever. CA and I have made many trips to the North Fork: whether engagement anniversaries, my birthday, and even had my Bachelorette Party! We love the south shore for its beaches, but the […]